It's been two months since our seventh update and there's a lot to talk about!

There have been various additions to our userspace, although most of the work in the last two months has been focused on fixing bugs and driver/kernel support.

freemangordon is still steadily working on connui, which is one of the core components of our modem support:

Once a few other things are sorted (integration with Telepathy) we will begin work on the icd2 oFono plugin, which will provide the actual connectivity part.

There has been a lot of movement on the PowerVR side (the 3D acceleration unit/ GPU that a number of our supported devices - such as N900 and the Droid 4 - use).

Developers from various platforms and devices are now trying to work on a single PowerVR patchset for mainline to make it easier to support new devices, and eventually attempt to mainline various kernel components. Since a couple of weeks, there is now a Github repository that contains recent kernel sources with some form of PowerVR support: https://github.com/openpvrsgx-devgroup

A mailing list for this effort is still being worked out, but the initial message (over a year ago) can be viewed here: https://www.pyra-handheld.com/pipermail/kernel/2018-January/002315.html

Hopefully there will soon be a base to support PowerVR on omap, sunxi and exynos platforms.

Additionally, spinal84 has, through truly admirable perseverance, figured out how to work around the PowerVR hangs and general slowness of Maemo Leste on the Nokia N900 and we've been working on ensuring those fixes end up in the alpha (#218)

You can see a video of PowerVR on Maemo Leste with better performance here:

This is useful for adding support for a new arm64 device. Previously we had to take the Raspberry Pi 3 image and remove device specific packages/drivers. The PineTablet and PinePhone will probably make some use of this generic rootfs.

The last two months have been particularly exciting for device support. Both the Nokia N900 and the Motorola Droid 4 now ship with Linux 5.0 with some additional patches.

For the Nokia N900, a new (and easier) way to install Maemo Leste is available and documented on our wiki - it is aimed only for users who have no intention of running the old Maemo (Fremantle). Suggested improvements are welcome, please add them to this ticket: Provide a way to flash leste (or u-boot) directly

Newer images for the Nokia N900 are also available:

And a performance optimised clutter and hildon-desktop are (temporarily) available here, kindly provided by spinal84:

Before you install this optimised clutter and hildon-desktop, ensure that your installation is up to date, either by installing the latest image and upgrading or just running apt update && apt upgrade!

You can install these packages by downloading both, and then running:

Subsequent updates might replace your optimised hildon-desktop again, but you can reinstall it with the same command.

Newer kernel images for the Nokia N900 are also available, but you will have to make sure that your /boot partition is an ext2 filesystem, older Maemo Leste images shipped with /boot as a vfat partition. You can copy all the files in /boot to a temporary location, and then call mkfs.ext2 on the boot partition and finally copy the files back. Here is a screenshot of Maemo Leste on the Nokia N900 using Linux 5.0: 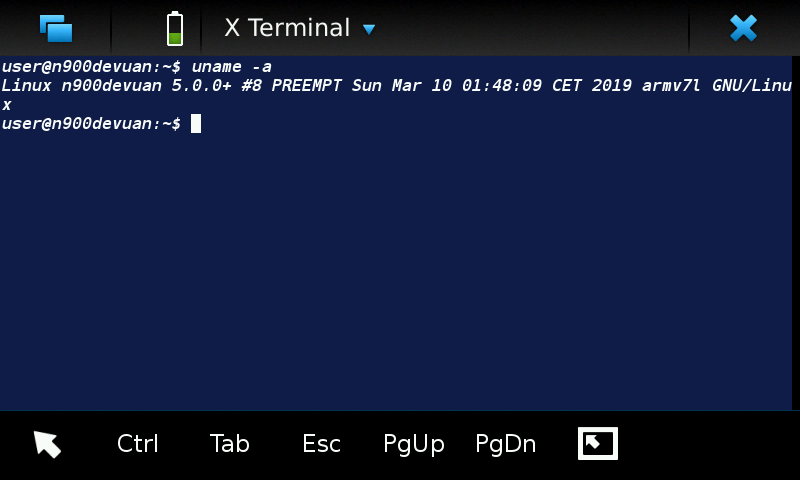 The N900 will now charge using up to 950mAh, instead of the previous 650mAh, see this pull request for n9xx-linux.

rebooting, who does that anyway?

All known problems regarding device shutdown and reboot have been fixed:

The LED patterns on the Nokia N900 should now also work just like Fremantle, see #186.

The Motorola Droid has seen some love - the most significant changes are way better kernel and driver support. The device is still not particularly useful for day-to-day usage due to the lack of PowerVR acceleration (but we'll get there). Experimental modem support is now in place, as well as audio and GPS support. This is the result of years of hard work from various people in the FOSS community, and it's amazing how well supported the device has become. 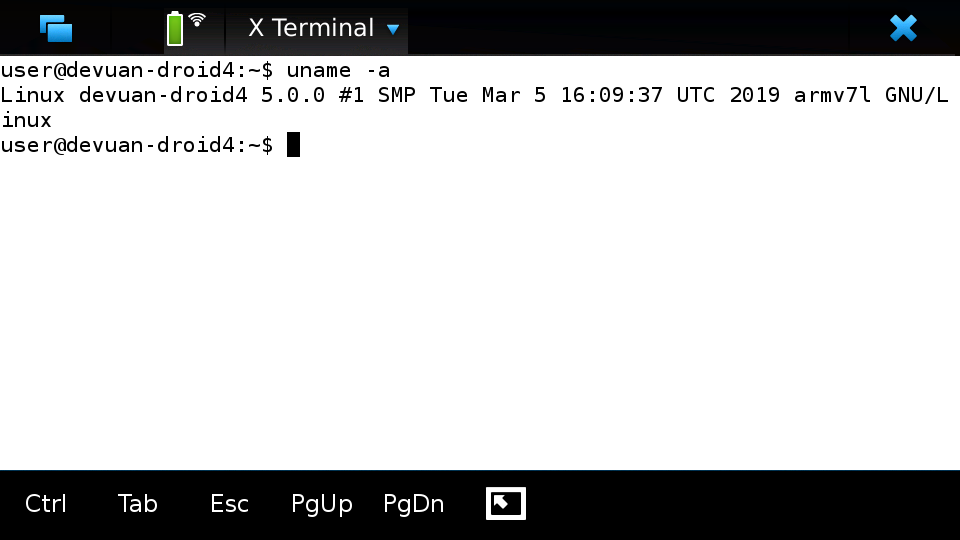 It should now be a lot easier to install Maemo Leste, thanks to all the work done by Tony Lindgren on kexecboot. The installation process is documented on our wiki:

Make sure that you use the latest images, since they have been modified to work well with kexecboot:

The latest images also contain a Debian kernel package for the kernel (see #220: linux-image-droid4 (currently at version 5.0.0+1m7.1_armhf.deb), and the source can be found here: https://github.com/maemo-leste/droid4-linux

Audio works now too, including various switches to control the modem and echo cancellation: 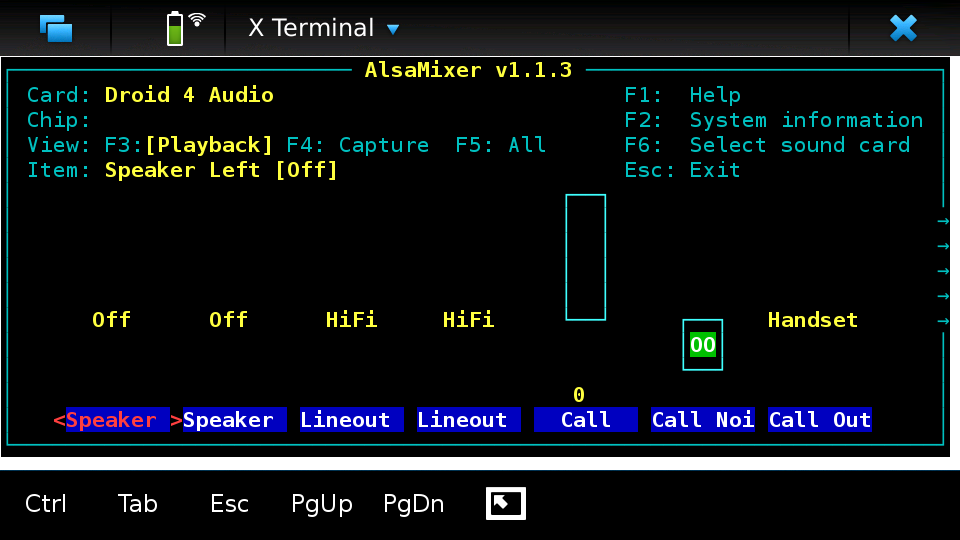 Pavel Machek has been working on oFono support for the Droid 4, and we will attempt to package that work for the Droid 4 soon. Then we should hopefully have a working UI test voice calls.

The Droid4 is generally more responsive than the Nokia N900 when it comes to CPU and IO bound operations, but this is not yet visible due to everything being rendered through a 3D pipeline on the cpu. Regardless, here's a screenshot with various applications running on the Droid 4: 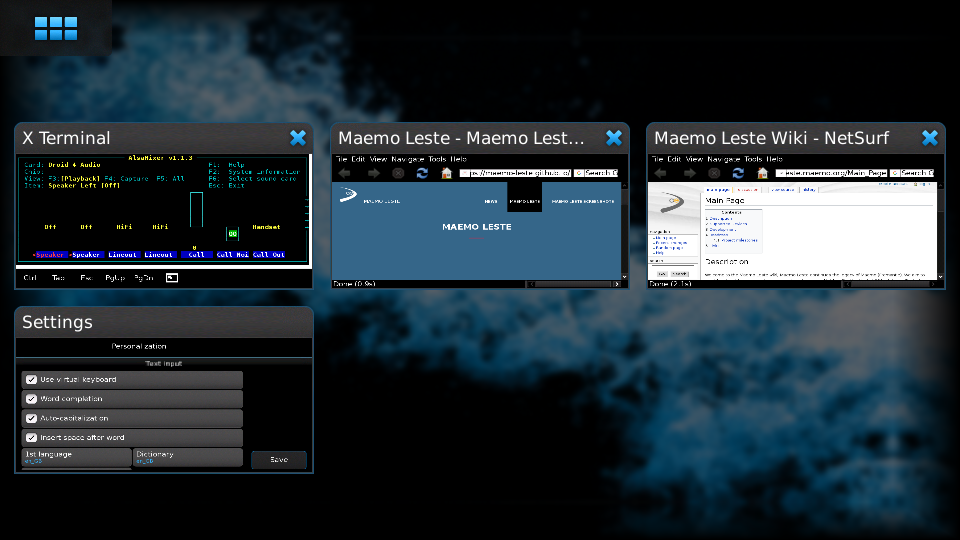 Pine64 PinePhone first development kit was sent to us some time before FOSDEM, and it took quite some time to test out various patch sets and fixes to these patch sets, but now the display works well, and the lima driver also works. The lima driver is still experimental, and hildon-desktop tends to crash under lima, but we'll get to solving those issues eventually.

At FOSDEM, the UBPorts people figured out how to make the touchscreen work as well, so we will probably release an image some time soon for the devkit, as it should quite closely match the upcoming PineTab.

There is a Devuan (the distribution that Maemo Leste is based on) conference in Amsterdam in April, so if you're around, it might be fun checking it out: https://devuan.org/os/debian-fork/d1conf-announce-20190119

The slides can be found here:

After the talk, we chatted for over an hour in the hall next to the Lightning Talks room. Several postmarketOS developers showed up, as did old Nokia employees who actually worked on Maemo Fremantle! The people from Necunos also showed up and demonstrated their prototype NC_1 board.

Also present at FOSDEM were people from PostmarketOS, UBPorts and KDE Plasma, and we got together for a picture: 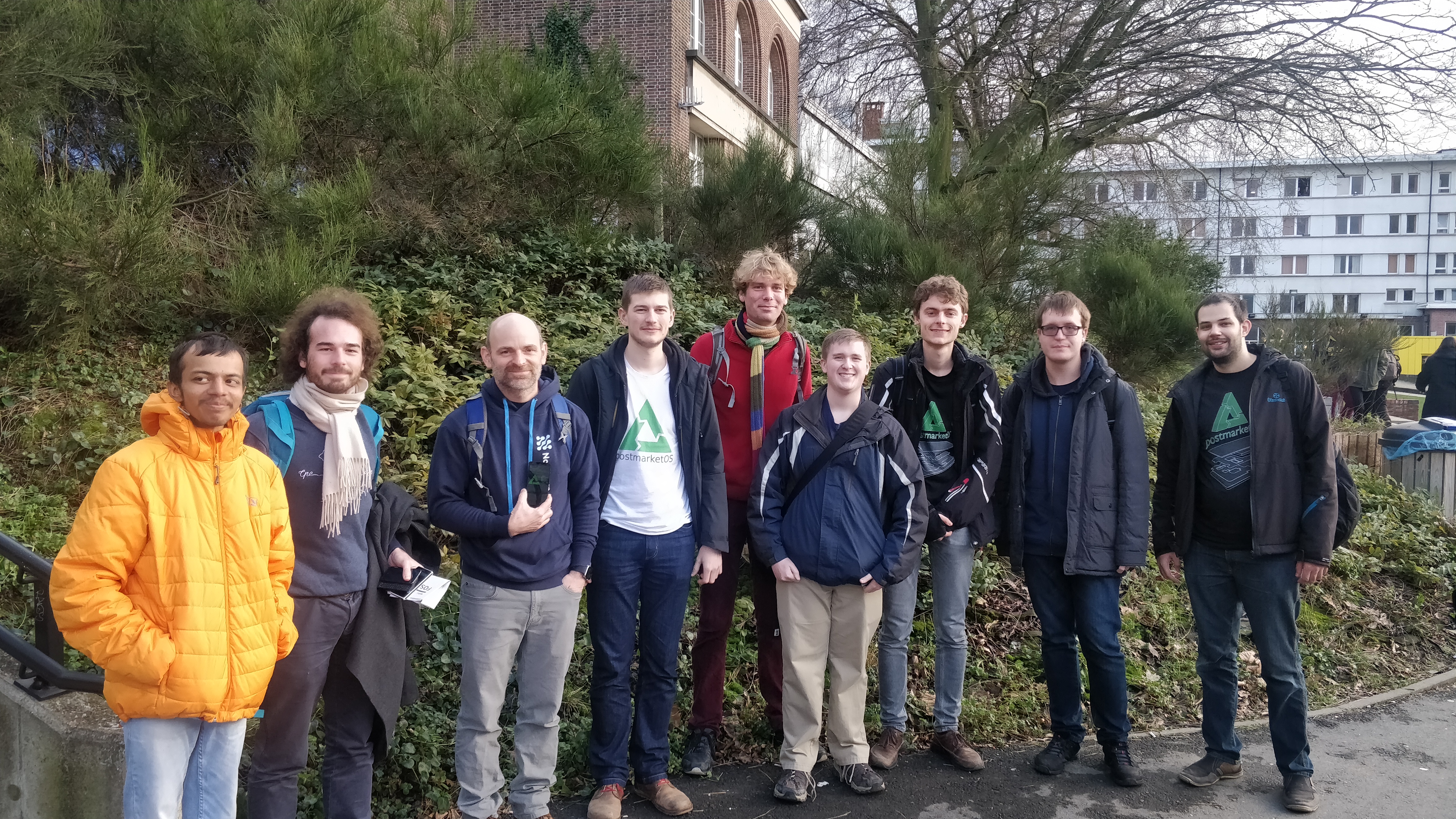 Additionally, various community hardware vendors were also present. The Pine64 community had a stand, where they presented their first phase Anakin devkit and the "Don't be evil" second phase devkit. Maemo Leste will receive several "Don't be evil" devkits somewhere this months, when they start shipping. In fact, there is already a placeholder for Maemo Leste OS releases: http://wiki.pine64.org/index.php/Project_Don%27t_be_evil#Maemo_OS_build

Some of us also met with the Necunos team and discussed some more details of their upcoming device, of which Maemo Leste will also receive a devkit.

A member of talk.maemo.org created this Crest of Maemo and offered to send it our way! 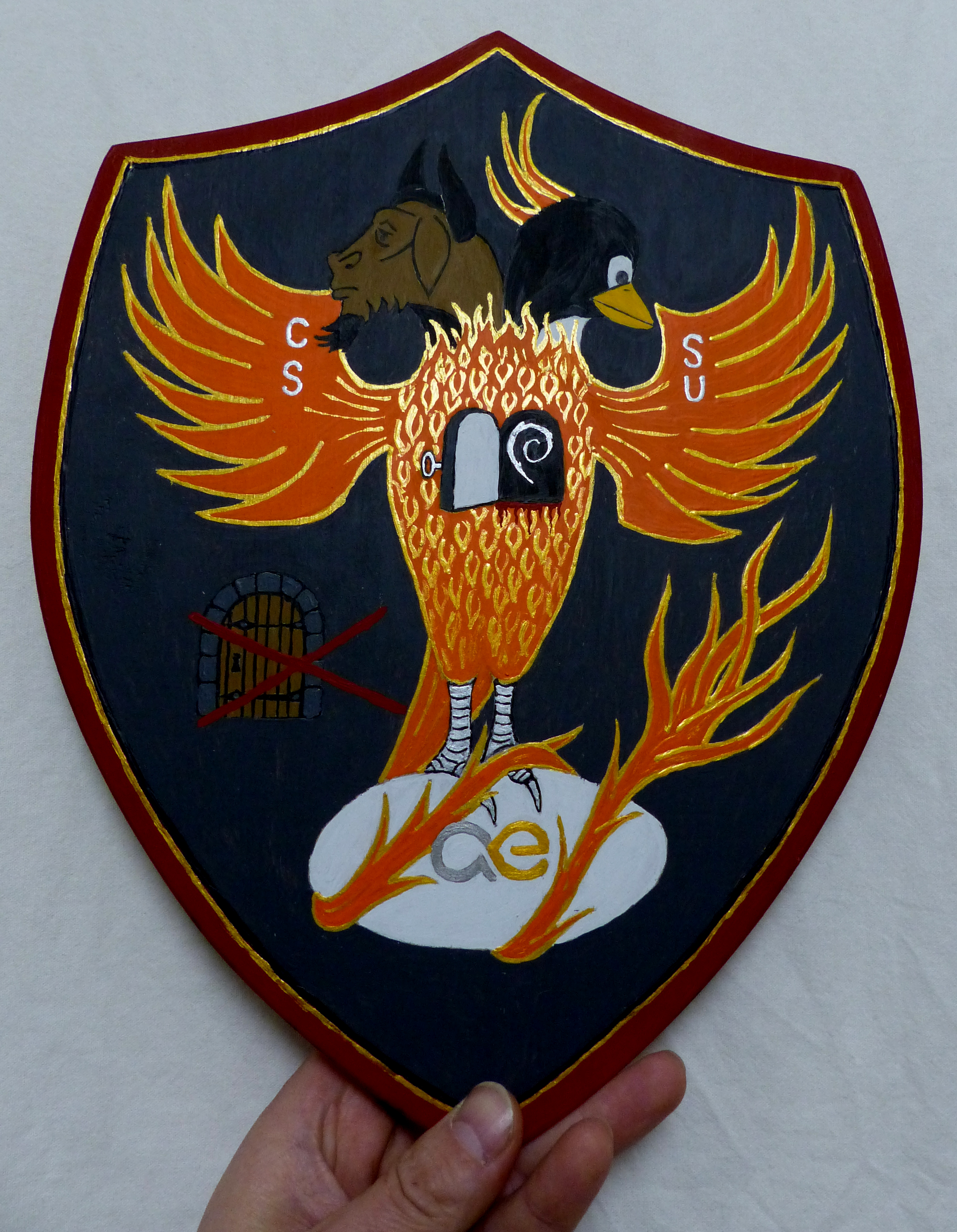 A loving fan has created this large reproduction of the Nokia N900, including hildon-desktop, the osso-xterm application, the status applets and even real backlight! The metal theme looks quite good, too. 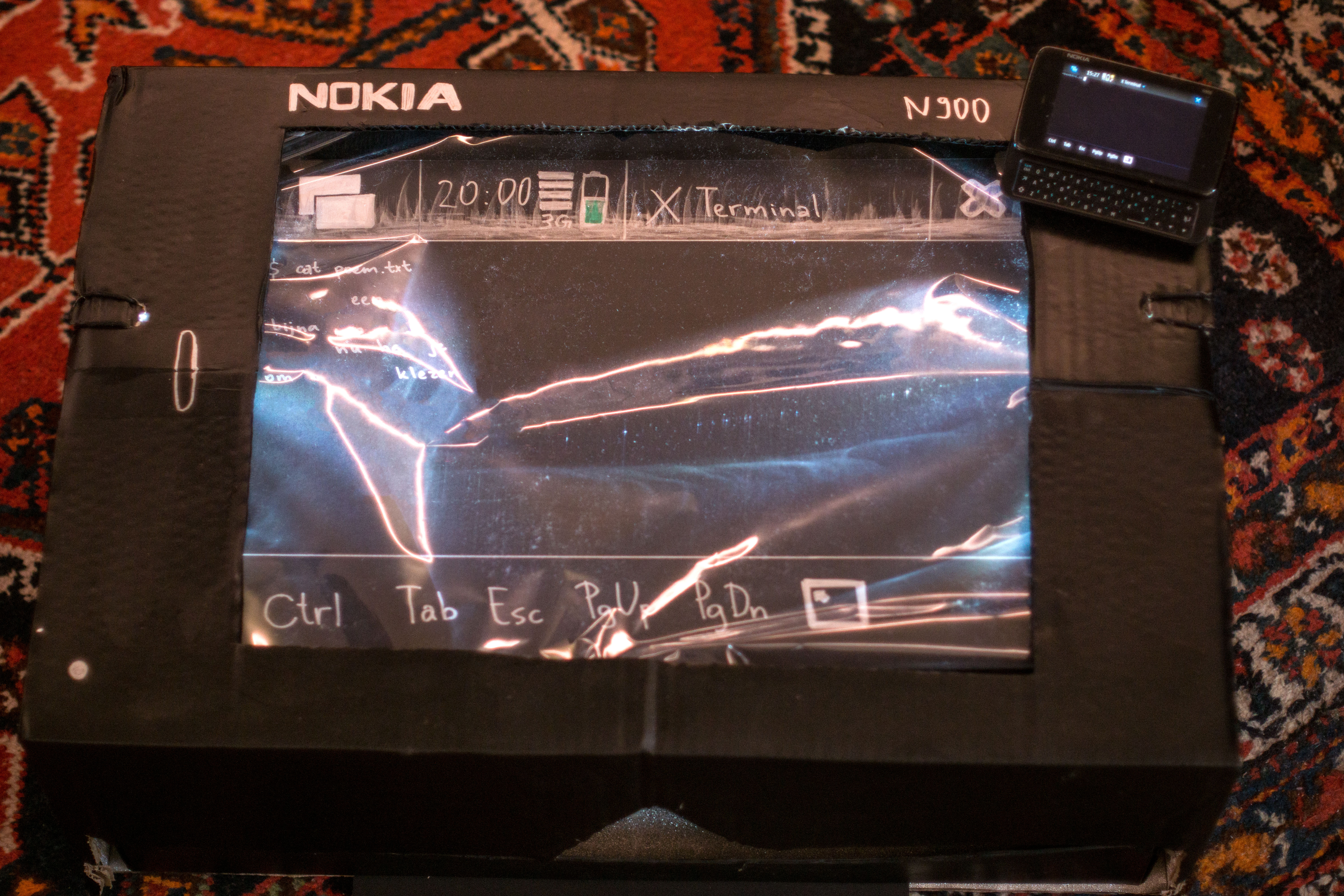 The next couple of updates will probably be accompanied with screenshots showing off some software straight from Debian repositories running on Maemo Leste, to show off how many applications are already available.

Qt5 applications can be started with different themes, this is Wireshark with the default theme: 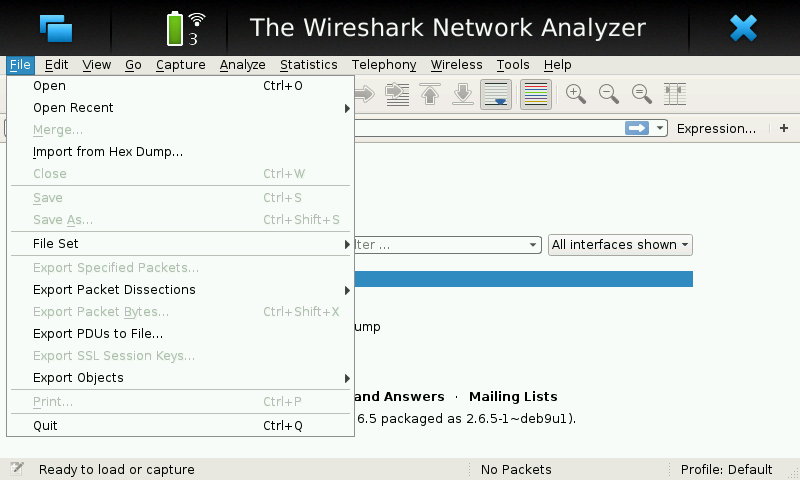 And this is wireshark with our (work in progress) Qt5 theme: 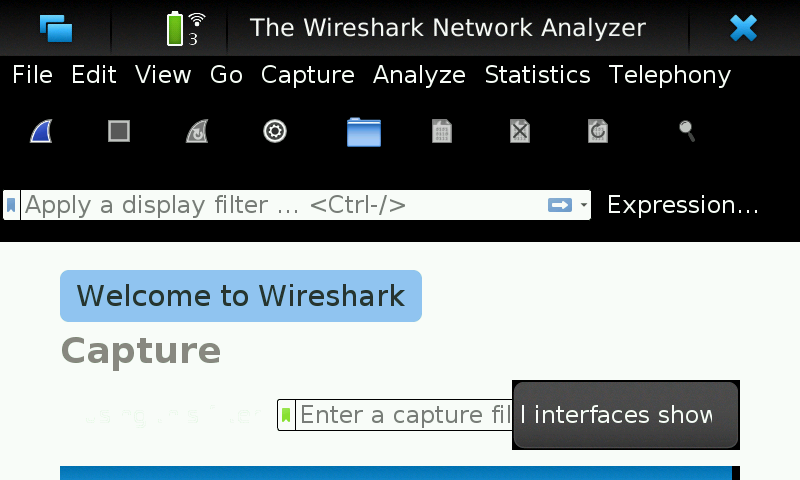 Wireshark is not particularly usable on such a small resolution regardless, but at least the theme fits - usability aside.

Other applications from Debian are also quite usable, without any recompilation whatsoever. This is GMPC, the Gnome frontend of MPD, the music player daemon. (These applications are not "hildonised", that is, they are not optimised for Maemo Leste per se, but it does goes to show that this might not always be necessary either): 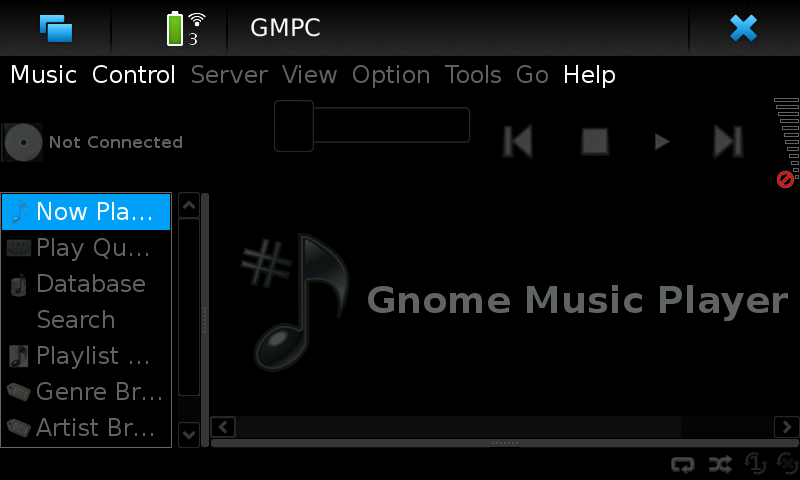 And here are it's initial assistant dialogs: 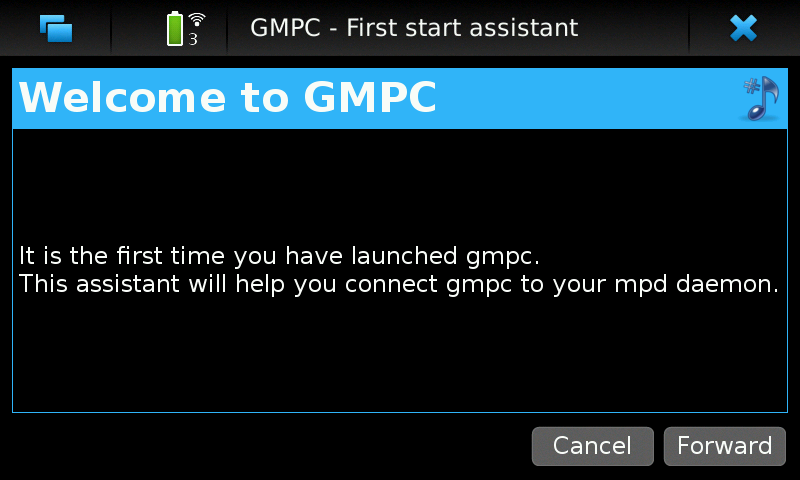 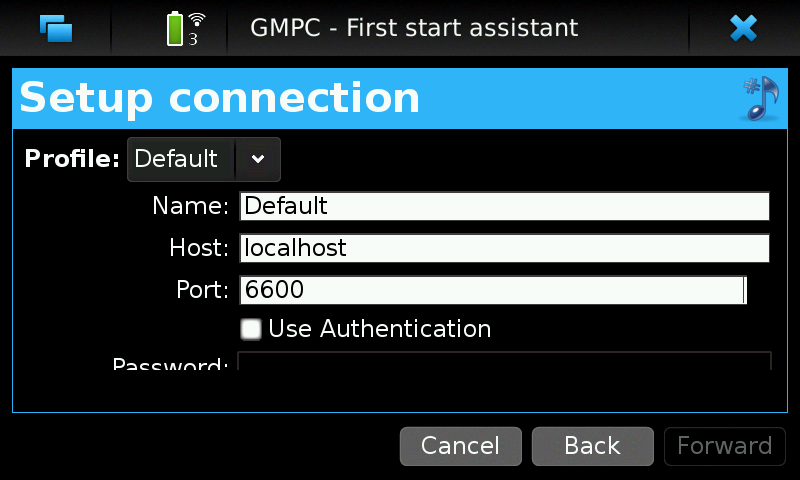 In this case, the virtual keyboard is also integrated in standard Debian gtk applications, such as netsurf, a very lightweight browser: 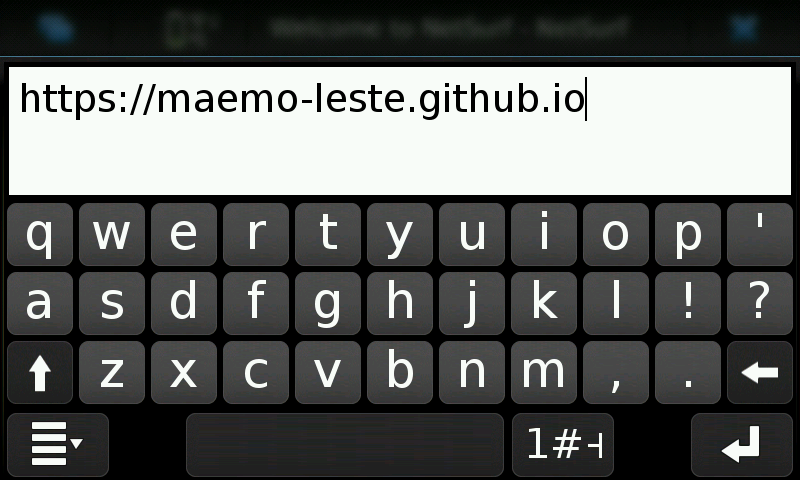 And the resulting web page render: 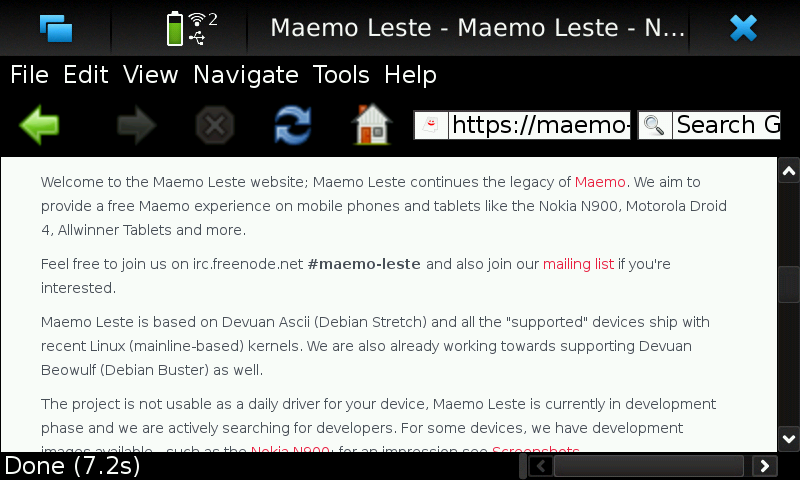 Other than that, it seems like we've reached almost all of our Alpha goals, to the point that we might actually issue the first Alpha release soon!

We may end up switching to Devuan Beowulf (Debian Buster) before or after the Alpha, it depends on how time it takes to port to the newer release, as well as the amount of bugs introduced by doing so.

We will likely also have one or two days of downtime on our Jenkins build service while we migrate it to a more powerful server to speed up build times and ensure that we will not run out of storage any time soon.

Personally, I hope that we will be able to get decent support for modems in place soon: with connui-cellular well on underway it may soon be time to start working on the oFono plugin for icd2. At least the Nokia N900 and Droid 4 now also have a working modem and (mostly) working oFono support, so that should be promising.

Hopefully we'll also get PowerVR support for the Droid 4 hammered out soon, that will make the device a lot more usable.

We have several Nokia N900 and Motorola Droid 4 units available to interested developers, so if you are interested in helping out but have trouble acquiring a device, let us know.